EA SPORTS is offering an exclusive FIFA 13 Ultimate Edition that will supply fans with 24 FIFA Ultimate Team gold packs to kick-start their season, and its most extensive global pre-order* incentive in the history of the FIFA franchise and you can pre-order yours TODAY with Sweetpatch TV! 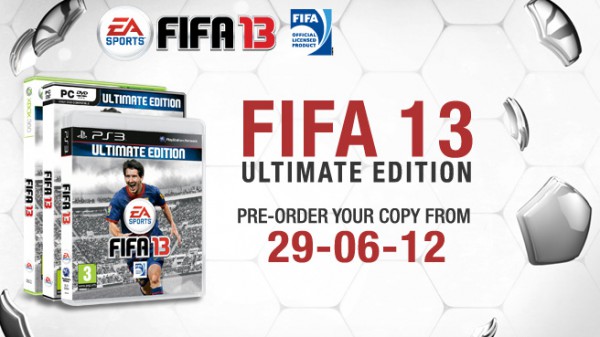 Fans that purchase the FIFA 13 Ultimate Edition will receive 24 FIFA Ultimate Team Gold Packs—one per week for 24 weeks with a total value of over £15 —to help build an ultimate team of football superstars.

FIFA Ultimate Team brings the massive FIFA online community together with fans building, managing and competing with their ultimate football team from the world’s best players in FIFA 13. Each gold pack is a mix of 12 items, including players, contracts, stadiums, managers, staff, fitness, healing, balls, kits, and badges. Gold Packs consist of players rated 75+ in-game, and include one rare item, such as enhanced player attributes, longer contracts, and the most coveted players.

The FIFA 13 Ultimate Edition is available only through pre-order or on September 28 (because this has been announced as RELEASE DAY!).

Be sure to use the appropriate link below where you can pre-order your copy of the exclusive FIFA 13 Ultimate Edition from here!