I was lucky enough to recently attend EA’s Studios in Guildford to get my hands on FIFA 14 current gen.  Check out here my preview of FIFA 14, my video preview and my interview with Producer Kantcho Doskov about sweaty goals, impact engine & bringing back indoor “footy”. 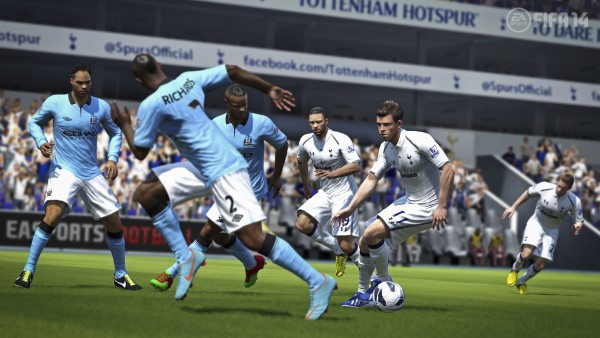 What can EA introduce to change up the game and make it worth my time and money?

Well, there are some new gameplay mechanics and elements, which look set to change how players will approach situations and control the flow of the game. Unfortunately, despite the earlier announcement of a strategic partnership with Microsoft for the Xbox One, the day was dedicated to the current-gen release of FIFA 14. So we didn’t get to see the new Ignite Engine in action, but let’s focus on what we did see.

Check out  my full preview over at Clickonline.com to see my thoughts on:

With the next-gen on the not-so-distant horizon, there is a nagging feeling that we saw FIFA 13.5 as it’s lacking the new Ignite Engine, the power of the next-gen and the possibilities that these open up. However, taken on merit as a standalone title within the FIFA franchise, it is plenty of fun, seems to tackle some of the issues that have faced previous titles and adds some new gameplay mechanics which refresh the game and adjust how players must approach situations.

EA is keeping some cards in its back pocket as little to nothing has been revealed regarding Career Mode and the ever-popular Ultimate Team. So, we could be proven wrong and we look forward to it.

My Interview with Producer Kantcho Doskov

After revealing some information about FIFA 14 at the Xbox reveal, those at EA were geared up to talk about the game itself, but was unfortunately restricted to talking about the current generation console offerings of the game. In spite of that, we managed to get a candid interview with Gameplay Producer Kantcho Doskov who talked “sweaty goals”, impact engine fails and what fans need to do to get indoor soccer back into the franchise.

A brief snippet of one of Kantcho’s responses to me:

So, animation is what I studied at school, it’s my passion along with football and I’m always very keen to get the best quality animations into the game. And actually, it makes a big difference.

So what do you think of my preview, video and interview and please ask away if there’s anything you’re curious about FIFA 14 that I might be able to answer.